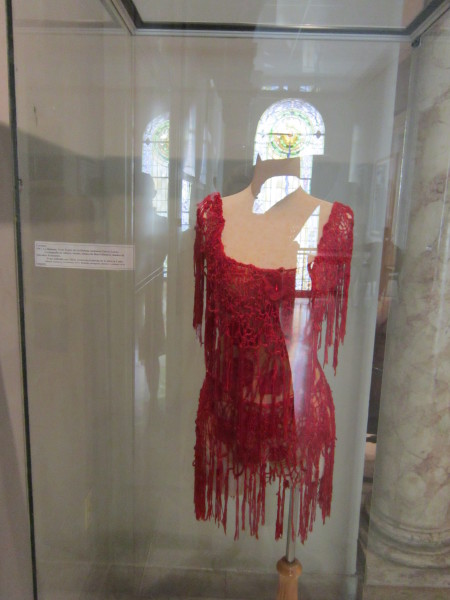 Dress worn by Alicia Alonso of The Cuban National Ballet for Carmen by Bizet. Choreography by Alberto Alonso.

With spectacular shots taken from above the dancers, this production of Carmen (Suite) by the Bolshoi Ballet is a must see!

The music, taken from the opera Carmen by Georges Bizet and arranged for strings and percussion, is not a 19th-century pastiche but rather “a creative meeting of the minds,” as Shchedrin put it, with Bizet’s melodies reclothed in a variety of fresh instrumental colors (including the frequent use of percussion), set to new rhythms and often phrased with a great deal of sly wit.

Initially banned by the Soviet hierarchy as “disrespectful” to the opera for precisely these qualities, the ballet has since become Shchedrin’s best-known work and has remained popular in the West as what reviewer James Sanderson of all music.com calls “an iconoclastic but highly entertaining retelling of Bizet’s opera.”

Alonso’s scenario centers on Carmen, Don José and the bullfighter Escamillo. Carmen is a passionate, free-spirited woman in contrast to the temperamental and fickle Don José. Fate, a ballerina dressed in black and a representation of Carmen’s alter ego, tells Carmen’s fortune with a deck of cards.

A fight with tobacco dealers leads to Carmen’s arrest by Captain Zúñiga. In jail, she seduces Don José and convinces him to release her from jail. Carmen is subsequently caught in a love triangle between Don José and popular bullfighter Escamillo.

Boris Messerer’s sets included a mock bullring which symbolizes life, uniting the bullfight and Carmen’s destiny in a sinister personage. Masked spectators and a uniformed judge represent society’s disapproval for the unconventional behavior of Carmen and her lovers.

Fate reappears in the final act playing the role of a bull and the three main characters meet in the arena. Carmen dances alternatively with Fate, Escamillo and Don José until she is stabbed. She dies caressing Don José’s face, revealing him as the assassin.

In this version, Bolshoi’s Svetlana Zakharova dances the lead role of Carmen.

If you felt the passion of Carmen and her lovers, then “Share” this ballet masterpiece with your friends!