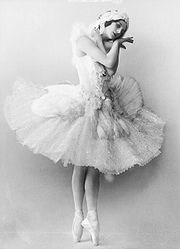 The life of famous Russian ballerina Ana Pavlova was an extraordinary one. She was born on February 12, 1881,  though there has been a bit of controversy on the exact date (January 31st) and died a few days shy of her 50th birthday, on January 23, 1931.

She has a special connection to Mexico, the county I call home, as she was the first classical ballerina to interpret the “Jarabe Tapatio” dance on pointe during her 1919 tour to this country.

The Jarabe Tapatio is commonly known as The Mexican Hat Dance. See her in the typical china poblana costume in the first video below (minutes 3:40 and 6:20).

Pavlova was the daughter of Lyubov Feodorovna, a washerwoman. Her father’s identity is not known. When Anna was very small, her mother married reserve soldier Matvey Pavlov, who died when Anna was two years old. She and her mother were very poor, and they spent the summers with Anna’s grandmother.

Some sources, including The Saint Petersburg Gazette, have claimed that her illegitimate father was the Jewish–Russian banker Lazar Polyakov. Her mother’s second husband, Matvey Pavlov, is believed to have adopted her at the age of three, by which she acquired his last name.

Pavlova’s passion for ballet began at the age of eight, when her mother took her to see The Sleeping Beauty at the Maryinsky Theatre. She knew then, that she was destined to dance.

When she turned ten, she was admitted to the St. Petersburg’s Imperial School of Ballet. Though frail, she was supple and impressed one of her teachers, Marius Petipa, who would later become her favorite ballet master.

The young Pavlova’s years of training were difficult, as classical ballet did not come easily to her. Her severely arched feet, thin ankles, and long limbs clashed with the small and compact body in favor for the ballerina at the time.

Her fellow students taunted her with such nicknames as The broom and La petite sauvage (The little savage). Undeterred, Pavlova trained to improve her technique.

She graduated in 1899 at age 18, being allowed to enter the Imperial Ballet a rank ahead of corps de ballet as a coryphée.

When the prima ballerina assoluta of the Imperial Theaters Mathilde Kschessinska was pregnant in 1901, she coached Pavlova in the role of Nikya in La Bayadère.

Kschessinska, not wanting to be upstaged, was certain Pavlova would fail in the role, as she was considered technically inferior because of her small ankles and lithe legs. Instead audiences became enchanted with Pavlova and her frail, ethereal look…

Pavlova’s first of many tours (it is estimated that she traveled over four hundred thousand miles in the days before air travel and was seen by millions) was to Moscow, Russia, in 1907.

During her sensational career as a dancer, dating back more than twenty years, after she had carried her classic art beyond Russia, she is said to have covered 350,000 miles in her tours and was spoken of as the most traveled of all modern artists. Her tours embraced the principal cities of the United States, Canada, Mexico, South America, South Africa, Europe and the Orient.

Proclaimed by her admirers as the greatest of living dancers, her appearance on the stage, whether in New York or Tokyo, was always made the occasion of a demonstration. The passage of time did not seem to dim the luster of her name or the exquisite technique of her dancing. She received ovations of the sort seldom accorded any one in the theatre and she enjoyed high recognition and honors from royalty.

Source from the New York Times on the day of her death.

Pavlova’s enthusiasm for ethnic dances was reflected in her programs. Polish, Russian, and Mexican dances were performed. Her visits to India and Japan led her to a serious study of their dance techniques.

Pavlova’s rare private days were spent at Ivy House in Hampstead, London, where she kept a menagerie of exotic birds and animals – including a pair of pet swans that were undoubtedly a source of imagery for Pavlova’s famous onstage version. Her companion, manager, and perhaps husband (Pavlova was contradictory concerning the exact nature of their relationship) was Victor Dandré, a fellow exile from St. Petersburg.  Anna Pavlova died of pleurisy in The Hague on January 23, 1931.

…Anna Pavlova remained largely committed to the classic style. She was known for her daintiness, frailness, lightness and both wittiness and pathos.

Her last world tour was in 1928-29 and her last performance in England in 1930. Anna Pavlova appeared in a few silent films: one, The Immortal Swan, she shot in 1924 but it was not shown until after her death — it originally toured theaters in 1935-1936 in special showings, then was released more generally in 1956.

This first video is the most complete video-biography I’ve found of the ballerina. Images of her in most of her roles and touring countries are shown. Even a few autographed postcards and memorabilia appear at the end.

A truly worthwhile video to enjoy!

Pavlova is perhaps most renowned for creating the role of The Dying Swan, a solo choreographed for her by Michel Fokine. The ballet, created in 1905, is danced to Le cygne from The Carnival of the Animals by Camille Saint-Saëns.

What an inspiring life Anna Pavlova had. Though it was cut short, her impact on the world of ballet is notable to this day. Many ballerinas have danced The Dying Swan. There are many more interesting little known facts about her that I’ll be writing about in the near future that have influenced present day ballerinas.

So, what did you think of her life? If you liked learning about this amazing ballet dancer, please share her legacy by kindly clicking “Like” and “Share” at the end of this post. Thank you!