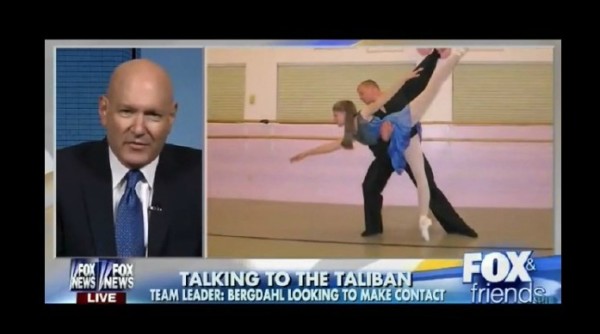 The hosts of Fox & Friends and Fox News psychiatric consultant Keith Ablow set a land-speed record Wednesday morning when, during a segment ostensibly psychoanalyzing freed Army Sgt. Bowe Bergdahl, they traced the soldier’s participation in a ballet to President Barack Obama’s essential un-Americanness in two minutes flat. That they did it while admitting that they knew next to nothing about Bergdahl is what makes it art.

“The fact that he was a dancer and a lifter — not a weightlifter, but I guess he would lift the ballerina — what does that mean?” Brian Kilmeade asked, with an assist from fellow host Steve Doocy.

“Supposedly he was recruited by these girls to have that role,” Ablow replied. “I think front and center on any stage is this guy’s M.O.: unless it doesn’t feed him narcissistically — you can’t give him a job unless you’re going to tell him you’re the star and we’re going to keep you at a throttle of twelve out of ten.”

“Well, he definitely wanted out of Afghanistan and maybe it’s his way of closing GTMO regardless of the consequences,” Doocy said.
“He wants out of America, my friend,” Ablow said. “Trust me.”

Ablow prefaced the entire exchange by conceding he had not evaluated Bergdahl or his parents “formally,” which is TV-psychospeak for “at all.”

So is he implying that ballet dancers are narcissistic? That they don’t know how to adhere to the rules of an institution? Dr. Ablow has never seen a ballet company at work. He has no idea the discipline and rigor of a company classes, rehearsals and grueling performances. Ballet is a “team sport,” for crying out loud!

He goes on to say that [Bowe Bergdahl] was “recruited” by “these girls,” referring to his ballet partners. Ballerinas don’t recruite their ballet partners, the company or school director does!

Just wait till you see the video, your jaw will drop too.

Controversy has surrounded newly freed Army Sgt. Bowe Bergdahl since his release from Taliban captivity, with some in the military, including members of his own unit, claiming he is a deserter, not a war hero.

But Sherry Horton knows a different Bergdahl than the one the world has come to see in the chilling proof of life videos the Taliban released.

“He’s a very interesting guy, he was very quiet, he was an observer,” Horton said.

Horton, the artistic director of Sun Valley Ballet in Idaho, said she was Bergdahl’s ballet teacher and later, she became his roommate in his hometown of Hailey, Idaho, when Bergdahl was about 18 or 19 years old. She describes Bergdahl as someone who was interested in mixed martial arts, culture, languages and learning new things.

“He was a wonderful [ballet] partner, all the girls enjoyed dancing with him because he was so strong and steady,” she said.

There’s more to Sgt. Bergdahl’s story and we have just seen the tip of the iceberg. However, if you want to know more watch the videos below: