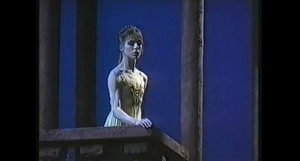 It seems appropriate on the eve of Valentine’s Day to share with you the ultimate love story: Romeo and Juliet, the ballet, it’s history and a couple of memorable interpretations by two ballet etoiles: Gelsey Kirkland and Alessandra Ferri.

There are several versions of the famous ballet: John Cranko’s, Lavery’s and Kenneth MacMillan’s. In the  videos below, both ballerinas dance to MacMillan’s choreography.

Before you settle in to enjoy these lovely videos, here’s a bit of background history of the famous ballet.

History of The Ultimate Love Story: Romeo and Juliet

…the ballet in its original form was completed by Prokofiev in September 1935, on commission by the Kirov Ballet, since when he first presented the music to the Bolshoi Ballet that year, they claimed it was “undanceable.”

Suites of the ballet music were heard in Moscow and the United States, but the full ballet premiered in the Mahen Theatre, Brno (then in Czechoslovakia, now in the Czech Republic), on 30 December 1938. It is better known today from the significantly revised version that was first presented at the Kirov Ballet in Leningrad on 11 January 1940, with choreography by Leonid Lavrovsky and with Galina Ulanova and Konstantin Sergeyev in the lead roles.

MacMillan had previously choreographed the balcony scene for Lynn Seymour and Christopher Gable to dance for Canadian Television. This experience made him seem a good candidate to choreograph the entire ballet for Covent Garden, when the Soviet Union refused to allow Leonid Lavrovsky’s classic production to tour to London.

MacMillan prepared his version with the blessing of Frederick Ashton, and Margot Fonteyn and Rudolph Nureyev brought new life to the characters, as did the set and costume designs by Nicholas Georgiadis; Fonteyn, considered to be near retirement, embarked upon a rejuvenated career with a partnership with Nureyev.

Though MacMillan had created the ballet on Lynn Seymour and Christopher Gable, for “bureaucratic reasons” Fonteyn and Nureyev danced the opening night, to MacMillan’s disappointment.

The production was filmed and received a cinematic release in 1966.

But first, go get some tissues…

Now an excerpt from the ballet, Romeo and Juliet, with Alessandra Ferri and Wayne Eagling. You might need more tissues…

The Ultimate Love Story: Romeo and Juliet, the ballet to Prokovief’s score is absolutely breathtaking, as is these dancers’ portrayal.

Do you agree? Which dancers’ interpretation did you like the most? Spread the Valentine’s Day spirit by clicking the “Like” and “Share” buttons at the end of this article. Have a lovely Valentine’s Day!