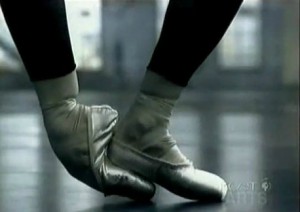 Alesandra Ferri warms up her feet for music video with Sting. Image excerpt from video.

Alessandra Ferri is one of my favorite ballerinas. Not only because she has the most incredibly beautiful ballet feet, but because of her powerful stage presence and dramatic interpretation, as you’ll witness in the music video below where she appears with Sting: as he plays, she dances with absolute technical control and spiritual abandon.

How did Alessandra Ferri get started?

Ferri joined the Royal Ballet in 1980 and in 1982, for her first major role in the ballet Mayerling, she was nominated for the Laurence Olivier Award for Outstanding First Achievement of the Year in Ballet. In 1983, she was nominated for and won the Laurence Olivier Award for Outstanding Individual Performance of the Year in a New Dance Production for her role in Sir Kenneth MacMillan’s Valley of Shadows. In 1984, she was promoted to the rank of Principal Dancer.

In 1985, Ferri left the Royal Ballet at the request of Mikhail Baryshnikov to become a Principal Dancer with American Ballet Theatre, under Baryshnikov’s own direction.[4] She stated that she needed a more rigorous training program that the company could provide.[3] In 2007 she brought Roberto Bolle to dance opposite her in her farewell performance of Romeo and Juliet.[4]

In 1992, Ferri became a Guest Star of American Ballet Theatre and began a very close collaboration with La Scala Theatre Ballet, becoming recognized as Prima Ballerina Assoluta of the company.

As promised: Alessandra Ferri and Sting Music Video. In this dance short you’ll see what I mean about her exceptional feet. Enjoy!

Music video with Alessandra Ferri and Sting from YouTube.

I highly recommend you watch Ferri dance the role of Juliet in MacMillan’s Romeo and Juliet with Wayne Eagling in this dramatic scene.

In 2010 ballerina Alessandra Ferri is shown in her  farewell curtain call after dancing Romeo and Juliet with Roberto Bolle. Julio Bocca, her dancing partner of 20 years carries her off stage. Her two adorable daughters, Mathilde and Emma, also appear on stage with her. (Only 19 seconds long.)

I hope you enjoyed watching these two videos with this amazing ballerina, Alessandra Ferri. Don’t forget to jump over to this link to see her in Romeo and Juliet!

Help a young ballerina or ballet student be inspired by “Sharing” this post by clicking the share button below. Until next time!